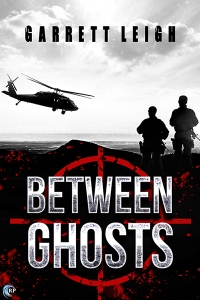 Blurb:  In 2003, journalist Connor Regan marched through London to add his voice to a million others, decrying the imminent invasion of Iraq. Eight months later, his brother, James, was killed in action in Mosul.

Three years on, Connor finds himself bound for Iraq to embed with an elite SAS team. He sets his boots on the ground looking for closure and solace—anything to ease the pain of his brother’s death. Instead he finds Sergeant Nathan Thompson.

Nat Thompson is a veteran commander, hardened by years of combat and haunted by the loss of his best friend. Being lumbered with a civilian is a hassle Nat doesn’t need, and he vows to do nothing more than keep the hapless hack from harm’s way.

But Connor proves far from hapless, and too compelling to ignore for long. He walks straight through the steel wall Nat’s built around his heart, and when their mission puts him in mortal danger, Nat must lay old ghosts to rest and fight to the death for the only man he’s ever truly loved.

Review:  I LOVE books by Garret Leigh. I look forward to reading every book she writes. The fact I also love reading military books had me really excited for Between Ghosts. I really liked this book. I just didn’t feel the need to rave to everyone who would listen the day I finished like usually do when I finish her books. This one had good depth and I liked the characters. It’s set in the Iraq war so It is fairly heavy on the day to day lives of soldiers. Which I felt was done very well. It could have seemed tedious but it helped me settled into the story and get a good feel for the mindset of the men. There’s a lot of waiting and worrying done by the soldiers. The soldiers know that it’s war and the reality is bad things happen. They’ve all seen awful things. It’s not that they’re numb to it compared to civilians. It’s just part of war time.

Connor is a journalist who goes from protesting the war to requesting to do an undercover hands on series of articles about the war from inside of it. He’s put under the charge of a special op team called the Charlie 3. The leader of that group is Nat. Nat isn’t happy to have to take a hack into a hostile territory. There’s a little blustering at first but Nat kind of likes Connor. Connor can’t help but be attracted to the alpha strong soldier. Nat is fiercely capable and cares about his men. He’s also attracted to the hack he didn’t want to bring along on his mission. Which is more than what it appears. The attraction and the mission.

I really liked this book. It wasn’t as intense as I expected but the writing was good. There was quite a bit of suspense near the end. I was completely intrigued by both of the MCs. Connor is essentially chasing ghosts when he requests to go to war. He’s a good writer but he’s never tackled anything like this. He’s going in hope of learning more about his brother who was killed in active duty three years before. Connor showing up was seemingly the last thing Nat wanted in his life. However Connor ended up being just what Nat needed. Through Connor he found intimacy he didn’t realize he’d been missing. Friends and even lovers he’d had but there was much more between Nat and Connor. They found love. For me the characters, primary and secondary, were what made this book compelling. There was a lot going on around them but learning about them was what I liked most.

Even though this might not be my favorite Garrett Leigh story it was still a really good book. I liked the complexity of the characters. There was a bit of resistance but the fact they took what precious moments of pleasure they could find in each other touches the romantic part of me. Their struggle wasn’t as heavy as I’ve come to expect from this author but I was still engaged and rooting for the couple. I loved Nat. He’s exactly the tough capable soldier type you’d expect him to be but once Connor enters the picture these more tender layers are exposed. The experience and falling in love with Nat seemed to heal the hurt settle the discontent in Connor. Nat finds simple and profound happiness in something beyond military life with Connor.. This was a good love story that I recommend reading.