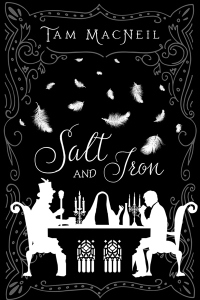 Blurb: James van Helsing is the youngest son of the famous monster-hunting family—and the family’s big disappointment. He’s falling in love with Gabe Marquez, his oldest friend and son of the family the van Helsings have worked alongside for years. Things get even harder for James when he becomes what he and everyone else despises most—a magic user.

He didn’t mean to evolve into such a despicable person, and he knows using magic is illegal, but there’s nothing James can do about it, no more than he can stop himself from loving Gabe. Just when things can’t seem to get worse, he and Gabe are called to help nab a network of magicians who are changing destiny. Not just any destiny, but the destinies of the van Helsing and Marquez families. James foresees a terrible fate, one in which monsters emerge from the cracks, along with his dark secret. And that’s when people start to die.

Review:  James Van Helsing is drunk. He’s always drunk. He is a drunk. He’s also the unfavored son and in love with his long time friend Gabe. James’ biggest offense is being a magic user. He can fix loose timelines into place. Being part of the most famous family to ever fight magic causes problems for a magic user. Not that anything is right in James’ life, but everything begins to get worse. A new case with a disturbing deck of tarot cards is leading in directions James doesn’t understand. He’s being challenged to look at things from a different angle. What he sees isn’t good. When Gabe is hurt James knows he has to do anything he can to save him. However, Gabe isn’t just hurt. Gabe is no longer human. James turns to some really big power players in the magical scene. They’re more than happy to help provided James can do some simple favors for them. The favors James expected, the problems at the heart of what is ultimately an intra-family feud he did not.

First things first. I hate present tense. I don’t feel a sense of immediacy, I end up feeling annoyed. In this story it was no different. James was a drunk and flying by the seat of his pants. Tense isn’t going to make me feel that even more so. Now, in regards to James being a drunk, he was a really good drunk. James didn’t magically become sober, because it’s not something that can just change when you’re busy fighting supernatural forces. James had to operate within the confines of his addiction, which is something all characters should have to do. James also had to operate within the confines of his own fears. Was it being a drunk that kept James from seeing what was in front of his face for so long? Was it James being so busy hiding his own personal faults he didn’t notice those in others? The reasons don’t really matter, the characterization was good. He was a man in hiding and denial. He had problems because of it. We were also shown how he was manipulated into becoming someone he hated.

I was fascinated by the use of tarot, loa, and faerie-like mythologies in this book. It was an interesting mash-up with Baron Samedi being part of a faerie style Summer Court. If you’re at all interested in the vagaries and the minutia of mythologies this book has great potential to lead you down all kinds of rabbit holes. You too can spend hours on Google learning more than you ever wanted to know about the tarot and the major arcana.

This is much less a romance than it is a paranormal mystery. James and Gabe love each other, but it’s what’s hiding in complex family histories that drives this story. And interestingly, the root of the troubles seems to be stunningly human and banal. In a world full of larger than life characters with impossible powers it’s something that we are all capable of succumbing to that is the true evil.

I have to add a word about New Glamis that has nothing at all to do with the book and everything to do with me and my personal experiences. I grew up near Glamis CA. It’s one permanent building and sand. Miles and miles of sand. I had issues seeing New Glamis as it was described. I was routinely shocked when trees or a river would be described.