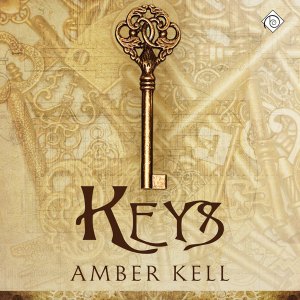 Blurb: My name is Octavius Septimus Stalk, but my friends call me Oss. I live in the City of Keys, a town of gears, keys, locks, and wonder. Our forefathers banished magic long ago, bolted the doors and locked everything up tight to keep people out and the town’s secrets in. Four Lock Lords control what information is left, and everyone else is left struggling to survive.

Despite what Thorne, my naïve lover, thinks, I was an orphan, but not a victim. When I walked the streets at the age of twelve, I learned fast where to steal the best food, how to use my daggers, and where to hide my would-be attackers’ bodies. No one suspected me of such violence. No one knew then or now that I have magic inside me.

Now, power-hungry men intend to release the magic for their own benefit—at the expense of the rest of the city. We will stop them, even if Thorne must battle his own kin, even if I must reveal my hidden talents and the role I seem destined to play.

Review:  I received the audio version of this book, which was my first exposure to it as well as to this author.

This book is written in first person, present tense. For me, this means it’s more crucial than ever for a narrator to embody the character who is voicing the story. In this case that character is the cocky, self- assured Oss, and I felt the narrator captured him remarkably well. In fact, he voiced each character uniquely and spot-on. His voice for Thorne was aptly dead sexy; I may have re-played some passages a few times 😉 There was a bit of a downside for me though. I felt a lack of intensity in the action scenes, giving the impression at times that the characters were nonplussed by the revelations and hair raising moments they encountered. My interest starting faltering at a point late in the story when I felt it should have been spiking. I do wonder how reading vs. listening would have impacted my reaction.

This book’s unique plot, combined with elements of fantasy, magic, steampunk and a touch of dystopian despair, nabbed my attention. I drove 8 miles past my freeway exit! In the City of Keys, magic had been locked away beneath the city centuries prior, spawning a prophecy telling of four individuals who would come together to safely open the magical underworld by a specific date. If the prophesied four did not materialize, the magic would spew forth unchecked, causing great harm. Of course some evil minded individuals had their sights on harnessing the magic for their nefarious purposes. Every building and business in the city was kept locked, only to be opened daily by Key Keepers (our man Oss is one), who worked under the watch of the four Lock Lords. The city itself was walled off from the toxic desert surrounding it, and dirigibles were used to import and export goods from other cities and lands. Four quadrants made up the city, with the first quadrant being the slums and the fourth being the elite.

The book started off on a reflective note, with Oss mulling over a great many thoughts while sharing the bed of his lover, Thorne. Boy, did this first chapter weave a magic spell on me! Oss and Thorne basking in the glow of lovemaking as Oss’s mind whirred away; mostly with negative thoughts. He was constantly on guard of his secrets and his heart. There was such a dichotomy of emotions coming from Oss as he lay in the seeming contentment of Thorne’s arms and love. Yep, Oss had big trust issues and tended to be self-deprecating when it came to Thorne’s interest. Would Thorne turn out to be Oss’s compatriot, or his demise? Oss wasn’t sure, and neither was I! Talk about being hooked on these guys.

Again, this story is told first person, so this is totally an Oss immersive experience. I found Oss and his mind to be fascinating and definitely wanted to see him find his happiness, and his destiny. As a street smart product of the First Quadrant who had worked his way up to a good job, he put forth a gutsy, hard exterior.

Oss turned out to be caring and loyal, willing to lay his life on the line for those who had and would stand by him. The trust issues he had with nearly everyone made for lots of tense listening moments, as I had no firm idea where many of the people in the story fell on this trust spectrum until they showed their true colors to Oss. Oss’s big secret, one he hadn’t even told Thorne when the story began, was that he could speak to and open any and all locks in the city. Yet, he somehow was clueless about the prophecy until well into the story. This puzzles me, he said he never attended school where he may have learned of such things, but he was a Key Keeper so I thought he would have heard talk of it via his work. Hmm.

Thorne was a city guard, a gentle giant, the opposite of Oss in stature and status. He was also a Fourth Quarter noble whose brother Lear was one of the Lock Lords, so as much as Oss was attracted to him, Thorne’s background pinged his trust issues. Thorne’s pure, genuine, devotion to Oss did become more than evident fairly soon, although I still had questions up ‘til a certain point. What can I say, I knew this was book one in a series! Plus, a character was introduced who could have been a new love interest for Oss, just saying. I love when authors throw in morsels like that to keep me guessing. Of course Thorne adored Oss. He would, and did, follow him anywhere. His devotion was stellar. Thorne gets a hu ge thumbs up from me.

Class inequality was obviously a big theme in the story, with the lower quarter citizens being repressed and the higher status ones acting either power hungry or oblivious to the vast plight of the lower class. These points were rammed home almost too much for me. Key secondary characters were well drawn, I especially liked Oss’s friend Maybre, the mechanization wiz. The seemingly unreciprocated crush Maybre had on Lear is something I’m looking forward to watching play out in the next book.

As Oss and his friends found themselves in the middle of the struggle to be the first to reach the underworld magic, the story seemed destined to a thrilling climax. I found I was a bit disappointed in the ultimate resolution. I was anticipating something more gripping. Again, perhaps it was hearing it narrated vs. reading it in my head. One point which kept niggling at me was how insular the characters seemed, not just in a walled city in the middle of a toxic desert, but as a group within the city. They seemed to walk distances with much ease and little time was required to reach different quadrants of the city, yet I didn’t get the impression that this was a small city. The magic city underneath seemed somewhat void of inhabitants, but I imagine we’ll hear a lot more about them in the next book.

Overall this is a fantastic story. I loved the characters, the concept of the keyed city, the prophecy, the opposites attract vibe between the couples, and the mystery of the magic. The secrets Oss was keeping for most of the book provided a great edge. As this is the first book in a series, there are still many questions to be answered in future installments. Can everyone possess and use magic, or only a select few? Was the world underneath the city really physically underneath, or on some other plane? Will Oss and Thorne travel in dirigibles to other places (I sure hope so!), and finally; who else will turn out to be good vs. evil. Bring on book two! 