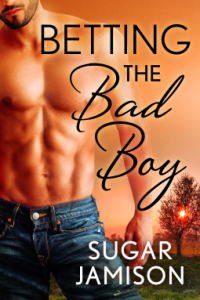 Blurb: Ten years ago, Duke King knew that getting involved with Grace Truman would only bring trouble into his already hard life. After all, the son of the town drunk has no business falling for the judge’s daughter…a passion that led to disaster and ended with Duke serving a ten year prison sentence. Duke never wanted to return to Destiny, especially now that he’s built a multimillion dollar custom car empire with his brothers. But when his sick aunt calls him home, he must face his past and discover a secret that instantly changes his life.

Grace never thought she would see Duke again, especially after years of silence. But when Duke comes storming back into her life, looking hotter than ever, and determined to get to know the son he never knew he had, she realizes that maybe she’d been wrong about him so many years ago. So Grace decides to make Duke a bet. If he can stay in the house with them for the next thirty days and prove he’ll be a good father, she’ll agree to letting him be part of his son’s life. If not, he’d better be prepared for a fight.

Going from single guy to family man isn’t going to be easy for Duke, especially with the still sexy, now fiery, Grace clouding his every thought. Can Duke be the man he never thought he could be or will his old bad boy ways be too much to conquer?

Review: I loved this small town romance with a very familiar trope: the surprise baby. Add in characters with a lot of history, the usual miscommunication, and some hot makeup sex and you’ve got this great read for a cold winter’s night.

Grace had fallen in love with Duke when they were in high school, but a huge part of him never believed he was good enough for her. She came from a privileged family and he came from a broken one. But she truly loved him, and when, for her own good (we all know that never works well), he dumped her when he found out she was giving up her prestigious scholarship to stay with him, it started a chain reaction that ended with him sentenced to ten years in prison for attempted murder and her left abandoned and pregnant.

Twelve years later Duke returns to Destiny a changed man–hugely successful and carrying a grudge. Called back to town cause the aunt who raised him is ill, he’s surprised when he sees Grace working at the hospital. What happened to her plans to leave?

Grace knows trouble has shown up in the form of one large male. It’s only a matter of time before the huge secret she’s been keeping gets out. What’s she going to say?

How can she explain keeping his son from him for over twelve years?

Hot, sexy and sweet, this romance captures the feel of a small town, where secrets aren’t secret and you can’t get away with anything. Loved this couple and can’t wait for the next!