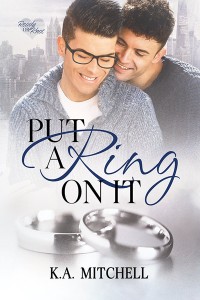 Blurb:  Kieran Delaney-Schwartz—adoptee, underachiever, and self-professed-slacker IT guy—lives his under-the-radar life by the motto: Don’t try, don’t fail. His adopted siblings are all overachievers thanks to his driven, liberal parents, but Kieran has elected to avoid disappointing anyone by not getting their hopes up. He’s coasting through his early twenties when he’s hit head-on by Theo. The successful decade-older Broadway producer sweeps him off his feet for a whirlwind thirteen months that are pretty sweet, until it all comes screeching to a halt on Valentine’s Day, with an unexpected proposal via an NYC Times Square flash mob.

Now everyone wants in on the wedding, except the grooms….

Review: When they were just starting to make their way in the world, four friends – Theo, Jax, Gideon and Dane – made a promise to always meet on the same day and at the place every year, no matter what.

Thirteen years later, and now in his mid thirties, Theo has made a successful career as a Broadway producer. He and Kieran, his partner, have been living together for six months and there’s no doubt in Theo’s mind that the younger man is who he wants to spend the rest of his life with. With the help of the cast of his latest musical, he plans and executes a romantic flash mob proposal to Kieran in the middle of Times Square on Valentine’s Day. How could anyone possibly say no to that? Well, no-one of course! Including the introverted and mortified boyfriend being proposed to!

Kieran does love Theo, but when Theo springs a surprise, and very public, proposal on him, he feels trapped. They have never even discussed the possibility of marriage. Not wanting to hurt Theo, Kieran says yes, planning on talking to Theo in private later. Instead, thanks to Theo’s money hungry manager, events start to spin out of both of their control and soon the two of them are feeling trapped by the situation.

When Theo’s three friends turn up demanding to know why Theo hadn’t turned up to their last annual get together, they waste no time in voicing their concern over Theo’s relationship with a twenty-five year old man. The added pressure may just be enough to break Theo and Kieran apart.

There’s no doubt each loved the other, but their communication with each other sure could have used some work! Kieran’s back and forth of wanting to just stay with Theo and get married/run for the hills about gave me whiplash. We’re constantly told how focused on Keiran Theo is, but his actions said otherwise as he repeatedly put Keiran into uncomfortable situations that most introverts would find difficult to deal with, or at the very least, really wouldn’t want to deal with. The lack of communication was frustrating because it felt overdone and too manufactured, and the whole mild erectile dysfunction thing was overblown and just added to the whole angst for angst’s sake.

Although the book ended rather abruptly, I really did love that last scene – a completely far-fetched tale, but perfect for the characters and the story, and it made me smile. Despite that not everything worked for me, and there were moments when the characters really did annoy me, I did enjoy the story. It kept me interested enough to want to know what the characters would do, what would happen to them and how it would end. There were some wonderful moments of connection between the two MCs in amongst the miscommunications that made the story worth the read, and I would love to see where all the characters go with the following books in the series.