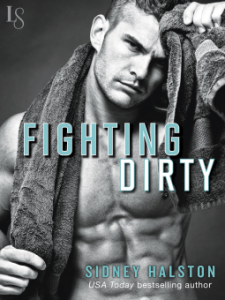 Blurb: With his preppy clothes and horn-rimmed glasses, Enzo Silva is the last dude anyone expects to find in a mixed martial arts gym. A wealthy Brazilian banker who never had to fight for anything, Enzo’s stuck in the amateur circuit—but he burns to make the pros. Maybe that explains the heat he feels whenever he’s around Jamie Lynn Calhoun. The pint-size, magenta-haired bartender with the Texas drawl is everything he’s not . . . and everything he craves.

Tough as nails and independent to a fault, Jamie Lynn—JL to her friends—works hard to pay her bills and keep life simple. Enzo is doing his best to complicate that. Even though she likes to bust his balls, he’s got some kind of a nerdy-hot vibe that makes JL wonder if she might finally be able to let her guard down. It might do the boy some good to spend some time in her world, where blood, sweat, and victory are as sweet as the first taste of real love

Review: This story was not what I was expecting–even so, I really enjoyed it! I went into it thinking it was going to be about MMA, but it was actually about a man who was finally growing up with a beautiful woman who’d suffered a lot of heartbreak in her past. Couldn’t put it down til I finished it!

Lorenzo Silva left Brazil and moved to the small town in Florida to work on a deal for his father’s company. His divorce had embarrassed his parents–especially since his marriage had been to his father’s business partner’s daughter. But it’s kind I’d hard to ignore finding your best friend having sex with your wife when you come home. For a long time, Enzo had felt stifled by his parents and all their familial expectations–beck, he’d married someone he didn’t even live fire them. Now was his chance to be himself. Moving to Tarpon Springs not only allowed him to get out from under working with his dad, but it also allowed him to continue his one great secret love, jiu-jitsu. He’s not only doing great working alone putting together a huge deal, he’s also getting to train as much as he wants and hopefully fight in a bout soon. He’s got to find a way to be able to stay in Florida because there’s nothing in Brazil he wants to be a part of anymore. And because he’s dying to go out with Jamie, the gorgeous waitress he’s been pursuing for the entire year he’s been in town.

Jamie Lynn Calhoun never knew her dad and her mother was an addict who treated Jamie and her twin Travis like crap. Growing up with abuse and neglect had left JL with scars–both visible and hidden deep inside. She tries to keep it light and casual with the men she dates, but she’s really attracted to Enzo. Every time he asks her out at the bar she waitresses at, she’s sooo tempted to go with him.

You’ve got to read their first date to believe it–super sweet, silly, and freaking hot! Enzo may be a stuffed-shirt businessman, but under those expensive suits…he’s got it going on! And when he gets with Jamie, the two combust in a profoundly unique mess of humor and honesty that had me crossing my fingers, hoping it could just keep going. Unfortunately, even in books it doesn’t work out that easily.

You’ll have to read it to find out what happens, but I can promise you a sweet and sexy ride to the finish! Enjoy!