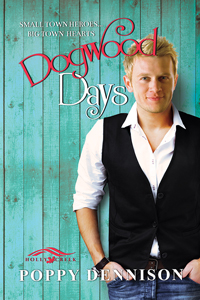 Jefferson Lee Davis is happy with his life in the city until his favorite uncle has a bad fall and he rushes to Holly Creek to make sure Uncle Sherman is okay. Jefferson Lee knows how to navigate small Southern town’s politics and the residents greet him with open arms. Everyone but the town’s sheriff, Zane Yarbrough, that is.

Dogwood Days, the town’s biggest festival is looming, so Jefferson has to step up and take over his uncle’s job as the town blogger, even if that puts him right in the sheriff’s path. Quirky neighbors, meddling family, and a sassy best friend all come together to make Jefferson Lee’s life in Holly Creek a full-time adventure. When he loses his job back in the city, Jefferson Lee has to start a new job search that will take him away from the town he’s learning to think of as home. Will this big-city boy find sweet romance in the arms of a small town sheriff or will the allure of the city call him back?

Review: I really enjoyed this slice of southern American small town as seen through the eyes of one very quixotic Jefferson Lee Davis. The fact that he took a leave of absence to help his Uncle Sherman recover from a broken leg told me all I needed to know about this sweet character, but the boy was clueless in the romance department. I saw the handsome sheriff right away as a potential partner and it was funny how it took me a little bit to realize he wasn’t an old man, so firmly had Jefferson put him in the friend category in his mind–and since that’s where the narration was coming from–you can imagine why! But I had a Eureka moment when somehow it came out that not only wasn’t Zane old, he was interested in Jefferson–who apparently had no clue.

The small North Carolina town of Holly Creek always holds its Dogwood Days festival every April, when the trees bloom at their finest. When his uncle takes a tumble while they’re on the phone together, Jefferson rushes back to Holly Creek. It seems Uncle Sherman’s got a concussion and a broken leg, and he’s going to be out of commission for several weeks. So Jefferson decides to take off from his job in Charlotte and take care of his uncle and run the town blog and calls his boss Joyce–only to find out his job’s been eliminated. No need to hurry back to work–ack! Luckily he’s really needed here, and the blog is journalism of a sort…
The characters are funny, the small town politics insane, and the writing is tongue-in-cheek, over the top, southern small town hilarious. At times a little too too, it’s very reminiscent of where I grew up, with the small events that are made a big deal of and the rivalries that span generations. What also comes through and what I remember most about my childhood, though, is the love that exists in those little towns. And Ms Dennison paints this story with that love in very broad stokes. Great read, thanks!