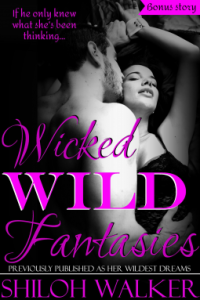 Blurb: Always the wallflower, Alison Ryan is used to being ignored and pushed around. Everybody takes her for granted, even the strung-out would-be mugger who tried to steal her purse late one night. She can’t say who was more surprised when she stood up to him…the mugger, herself…or Detective Alex O’Malley, her brother’s best friend and the man she’s loved for most of her life.

When a little bit of comforting goes sideways, Ali ends up living out one of her most hidden fantasies, having Alex’s mouth on hers, his hands sliding all over her body.

The last thing Alex O’Malley expected was to wake up and find himself wrapped around his best friend’s baby sister. He’d just been trying to be a friend and he wakes up in wonderland. Before he could get his head wrapped around what’s going on, though, his mouth gets him in trouble and Alison takes off. Plagued by guilt and a need that just won’t quit, he keeps away from her.

When life has them crashing back together, Alex can hardly believe his eyes. The shy mouse who used to pretend she wasn’t staring at him is gone and in her place is a strong, sexy confident woman who isn’t afraid to take her life—and her needs—into her own hands.

Determined to convince her to give him a chance, Alex sets out to make her understand that he is the one man who can make all her wicked, wild fantasies come true.

Previously published as HER WILDEST DREAMS. This title has been extensively rewritten and revised. New material has been added and it has been re-edited. Also includes a bonus story, Hunt Me.

Review: These little re-issues of Shiloh Walker’s erotica are deliciously sensual fast reads that titillate your senses and indulge your inner fantasies with amazingly descriptive sex scenes sure to please even the most cynical reader. The engaging juxtaposition of experienced cop versus innocent, virginal wallflower is a well-used romance trope that works here, and her hidden needs that flower into being with his unintended rough treatment of her are an intense overload of smoky sexual heat.

Iff you’re into a bit of kink and submission and like a great little story to go with it, then this book is a great choice. I really liked the build-up of the characters and there wasn’t a lot of “oh, it’s my best friend’s sister so I can’t…” After the initial shock, he just decided that’s what he wanted and then he let go of it. The heroine was actually stronger than anyone thought and I really appreciated her thought processes and sense of humor. It was great reading about her coming into her own and getting what she wanted at long last–a relationship with Alex, who she’d been crushing on for years.