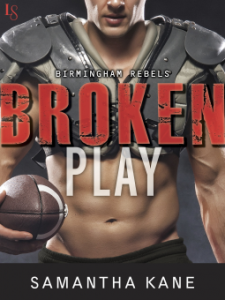 Marian Treadwell knows all about the video. And now that she’s the Rebels’ new assistant offensive coach, she can’t look at Beau and Cass without picturing their hard, naked bodies—with her pressed in between. Marian would like nothing more than to indulge those impulses, but she knows better than to get too close to her players, a bunch of adrenaline-fueled alpha males who don’t always follow the rules.

Just the thought of sharing the gorgeous yet guarded Marian drives Cass wild. At first, Beau isn’t sure she’s right for them . . . and lately, all he desires is a little alone time with Cass to explore their new intimacy. But it’s only a matter of time before Cass breaks through both of their defenses. Because when seduction is the game plan, he always plays to win.

Marian shouldn’t be drawn to football players Cass and Beau. They’re known as huge sexual “players” to the team and coaching staff–especially since the sex tape of them having sex with that woman went viral. The horrible incident in Marian’s past has already cost her so much in her life, and it was because of people like them…or was it?

And Marian definitely hadn’t signed up for what had happened to her. But Cass and Beau are so tempting, so HOT, and ever since she saw the footage of their sex video, she can’t get the vision of herself with the two of them out of her head.

Cass is crazy for Marian and convinces Beau that she’s the one for them. Once they finally break through her defenses and get her onboard, Beau starts to believe it too. That Marian is the one they’ve been searching for, the one women who can connect them and make their dreams come true. But when Marian’s past becomes a stumbling block to their future, can the three of them find a way to break through the pain and build a new tomorrow? How can they overcome it?

I enjoyed this book and everything about it. The three main characters were great, carefully described and perfectly developed, acting in vividly choreographed scenes that were just delicious–I mean, how can you go wrong with football player physiques?! I had one issue with the end–just couldn’t go with the reasoning for it, seemed over the top. Otherwise a completely enjoyable read! Thanks.