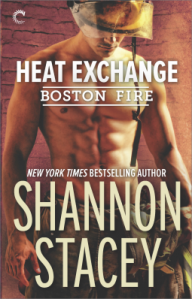 Blurb: Lydia Kincaid left Boston to get away from the firefighting community—but family is number one, and her father needs her help running the pub he bought when he retired. Soon, Lydia finds it hard to resist the familiar comfort and routine, and even harder to resist her brother’s handsome friend Aidan.

Aidan Hunt is a firefighter because of the Kincaid family. He’s had the hots for Lydia for years, but if ever a woman was off-limits to him, it’s her. She’s his mentor’s daughter. His best friend’s sister. The ex-wife of a fellow firefighter. But his plan to play it cool fails, and soon he and Lydia have crossed a line they can’t uncross.

As flirtation turns into something more serious, Lydia knows she should be planning her escape. Being a firefighter’s wife was the hardest thing she’s ever done, and she doesn’t know if she has the strength to do it again. Aidan can’t imagine walking away from Boston Fire—the job and the brotherhood are his life. But if he wants Lydia in it, he’ll have to decide who’s first in his heart.

Review: Shannon Stacey is one of my go-to authors and I’ve loved her earlier series a lot. The Kowalskis are hysterical! This new, more serious series about Boston firefighters is really excellent and I enjoyed it for many reasons. Number one, she’s just a great storyteller. Number two, I work with first responders–firefighters, police officers, SAR dog handlers, and EMTs–and think they are amazing people. And number three, this was not only a more serious tale about love, loss, and damaged people, it was about choosing how you respond to the things that happen in your life instead of reacting to them. I loved the story, the message, and the takeaway–and I can’t wait for the next!

Lydia’s had it with firefighters. Raised by one, grew up with one, married and divorced one. She’s moved away from her hometown to another state and is working at a not so great job when she gets the call–her sister Ashley’s husband Danny has left her. She needs Lydia to come home and take care of the family bar. Her father’s health precludes his being able to do it alone or full time. Her brother is a firefighter. Her mother had passed away during her childhood. There’s no one else. So she quits her job, leaves her apartment paid up for a couple of months, and heads home to Kincaid’s pub. But it’s temporary.

Aidan Hunt’s life was changed when he was eleven. After his family was involved in a horrible car accident, he alone had shouldered the load and taken care of his two siblings while his mother fell apart on the side of the road. One of the responding firefighters has seen his hidden strength, his calm, and had come to talk to him after the accident about being a firefighter when he grew up. That firefighter was Tommy Kincaid, Lydia’s father. When Aidan had come to him after high school, looking for guidance, it started a years long relationship between the two and a brotherhood of sorts for Aidan and Lydia’s brother Scotty, who was the same age. They’d gone through training together and served on the same squad with each other. For Aidan, being a firefighter was his calling.

For Lydia, firefighting was the thing her father put before his family. Every.Single.Time. Her ex-husband just liked to look like a hero and screwed around on her. Ashley’s husband Danny was also a firefighter, and while she loved him and knew that wasn’t the issue breaking them up, it just added to her ire. Lydia just wanted to be first choice for someone. And for her, a firefighter meant the brotherhood came first. So even though sparks flew when she was around Aidan, her baby brother’s friend, that meant he was off limits. Too bad her hormones didn’t get the message–and neither did Aidan.

We all know what happens when you add heat to sparks, right?

Searching for a way to be with Aidan without breaking the brother code and pissing off Scotty is a challenge for them both. The four year age difference is a challenge for Lydia. Staying in town and being with a firefighter again is not just a challenge for Lydia–it’s bringing back all the negative emotions from her past with it. For Aidan, having Lydia is great, but having someone else who hates what he does for a living sucks, but he understands. For his family, it’s about status. For Lydia, it’s pain from her marriage and her childhood, all rolled up in her self-esteem. Can he be what she needs without sacrificing himself at the same time?

Shannon Stacey’s storytelling skills carry such richness and depth, sharing heat and passion while bringing home the love. Kudos to her for this sensational new series that’s sure to be a can’t-miss with fans everywhere! Thanks!