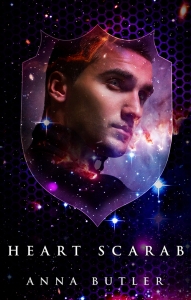 Blurb:  Shield Captain Bennet is on Telnos, a unpleasant little planet inhabited by religious fanatics and unregistered miners running illegal solactinium mines. It’s about to be about to be overrun by the Maess. Bennet’s job is to get out as many civilians as he can, but the enemy arrives before the evacuation is complete. Caught in a vicious fire fight, Bennet is left behind, presumed dead.

His family is grieving. Joss, his long-term partner, grieves with them; lost, unhappy, remorseful. First Lieutenant Flynn has no official ‘rights’ here. He isn’t family. He isn’t partner or lover.

All he is, is broken.

Review:  When I read the first book in this series, Gryfalcon, I was a little reluctant.  I’m not a huge fan of sci-if, but it sounded interesting, so I bailed in.  I was pleasantly surprised and fell in love with the characters and the world created by Anna Butler.  To my own shock, I gave Gryfalcon 4.5 Stars.  Heart Scarab is even better.

In Heart Scarab, all the great characters are back and I’m already familiar with the various military and academic divisions, so falling back into the story was as smooth as silk. Bennet and his long time partner, Joss, are still at odds over Bennet’s refusal to leave Shield and take a position with the Thebaid Institute where Bennet would be safe at home with Joss all the time.  Bennet loves Shield.  He loves his ship, the Hyperion, and his crew, especially his second in command and best friend, Rosie. He will never leave voluntarily which is something Joss will never understand.

And… there is Flynn.  Bennet has not forgotten the nights he spent with the sexy, bad boy Mosquito pilot who saved him from the Maess drones after a hair raising mission on T18…or the nights they spent together on the Gryfalcon afterward.  And Flynn hasn’t forgotten either, even though it’s been way over a year since their time together.  A time that Bennet spent with Joss, and a time that Flynn spent remembering and dreaming of Bennet.

But this story really took off for me when Bennet and Rosie and the rest of the Hyperion’s crew were on Telnos, with descriptions so vivid that I could feel the heat and humidity, smell the awful odors, hear the constant buzz of insects and feel the stinging, crawling things on my skin.  A horrible place.  And Bennet was left there; left for dead when the Maess arrived before they could rescue all of the inhabitants.  He wasn’t dead, but badly hurt…left in an inhospitable environment now populated by the awful Maess drones and a few unforgettable characters who help him heal and survive.

I could go on, but not without getting into way too much detail.  The aftermath of Bennet’s “death” on Telnos for his family and lovers, his near death and difficult survival, is some of the most emotionally intense scenes I’ve ever read, with so much emotional depth that my heart ached for them all.