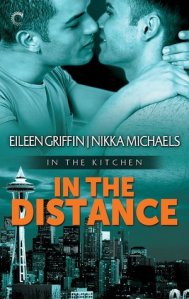 Blurb:  Tyler Mitchell has worked hard to rebuild his life after his family kicked him out. A culinary student and sous chef who spends his spare time volunteering with kids, he’s happy enough even though he has no time to consider a relationship.

Trevor Pratt is finally getting over losing his best friend and the one person he wanted to spend the rest of his life with, but it’s taken screwing every cute guy in Manhattan to get there. He’s vowed to repair the friendship he endangered, but that’s hard to do when his friend’s new employee catches his eye. Despite being warned to stay away from Tyler, Trevor knows the sous chef is more than just a hookup.

Romance is a terrible idea. Trevor is ten years older and a relentless playboy. Tyler is still unsure of his place in the world. Neither of them is ready for life-changing love, but as things heat up, their chemistry in the bedroom might just take that decision out of their hands.

Review: I really liked this book. I liked it enough I’ll probably be going back and reading the first two. I believe this is one of those series you’ll want to read in order to get all the inside jokes but I did not and seemed to follow along just fine. It’s possible some back story may have helped or swayed my opinion of Trevor. Who knows. I know I liked him a lot. My favorite in this one.

Twenty year old Tyler is finally in a place in his life he’s proud off. His parents kicked him out of the house after catching him kissing a boy when he was a teenager. It was rough but he survived it. He’s made his way from living on the streets to having an apartment of his own and a promising career as a sous chef thanks to Ethan and Jamie (couple from previous book) taking him under their wing. Tyler is going to culinary school and working. He also volunteers in the very little free time he has. He’s so busy he doesn’t realize he’s missing something in his life until Trevor offers to take him out one night.

Trevor is a charming and handsome rich guy in his early thirties. He’s always been happy to find a bed mate whenever one catches his eye. No commitments. Just fun. Life has been pretty easy for Trevor. His parents provided a healthy trust fund and a loving home. Yeah he’s a fun and mostly carefree guy but nobody ever takes him seriously or expects him to be all that emotionally deep. When he sees Tyler again he feels a need to help the kid have some fun. Trevor never expects to develop feelings for him.

I really liked the slow seduction of this book. The guys were hot and cold. Mostly because of Tyler and his issues with trusting people. I do love some delicious tension. Lots of teasing of those will they or won’t they moments. Trevor and Tyler developed a friendship that eventually became more. There was always an attraction but Trevor was warned off pursuing Tyler by Ethan and Jamie because they just see him as a playboy. Tyler thinks Trevor is way out of his league and probably just out for a bootie call because why would he want a guy who was homeless and takes the bus. Trevor is pretty persistent about wanting to get closer to Tyler while Tyler is constantly confused and overwhelmed by Trevor’s actions. For the most part I loved all this. And then it got to be too much. It went too far IMO. Trevor is NOT a bad guy. He obviously had feelings for Tyler but Tyler was forever obtuse in realizing it. Tyler misconstrued many situations and lashed out too frequently at Trevor who, from my POV, was just trying to be nice. It made me pretty uncomfortable how Jamie, Trevor and Tyler all disregarded Trevor’s feelings about pretty much everything. Being a rich guy doesn’t make him heartless and cold. Tyler’s feelings don’t deserve more consideration than Trevor’s. It all felt very one sided. Which ultimately dropped my rating of this book because I became so frustrated with how it was handled. I know Tyler had it rough and has a ton of shit to work through but I do not excuse hurting someone over and over. I just can’t.

Like I said above. I liked this book quite a bit more than I expected. I’ve never read these authors but will be checking out their other work. Trevor was so fun and charming. I’d totally be a fan of his. Tyler for the most part was adorable and self conscious with these bouts of bravery. He was pretty complex while Trevor added the sexy and fun element to keep the story from being too heavy. Trevor also had some depth that too many people overlooked. So yeah I had some issues with this one but I still really liked it. Great characters. Good tension. Some pretty funny moments. I’d recommend checking this one out!