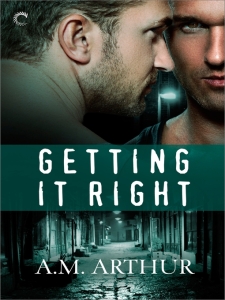 Blurb:  Detective Nathan Wolf might just be a junior detective, but he tackles every case with the passion that he lacks in his personal life. A series of failed relationships with women has left him still single at thirty-four—because he’s too scared to admit to his longtime crush on his best friend James.

Dr. James Taggert likes to keep his profession as a psychiatrist separate from his party-animal persona. Known around the gay clubs as Tag, he’s the guy who screws them, leaves them, and never looks back. But James’s drinking is getting heavier, and when bad memories from the past resurface, he’s close to becoming the worst version of himself.

After a drunken blackout ends in a hot and heavy make-out session with his very straight best friend, James has no memory of the steamy affair. But Nathan isn’t sorry for the kisses that James can’t remember. Nathan finally musters the courage to tell James how he really feels, but a life-altering event might force them apart before they can ever be together.

Review: This read like a big long therapy session. Or talk it out session. Everyone is always having bad things happen. Screwing up. Drinking too much. Then they just talk it all out or say they need space. One of the MCs is a psychologist and he has a need to fix all the messed up people he seems to collect or recruits because he sees the pain in people. I don’t normally do this but as I read this book I couldn’t help make a list of the heavy topics characters experience in this book. There were so many! I think it’ll make my point.

Basically for me it was just too much. Most of these things happen to the secondary characters and really did nothing for me. Just excessive drama with no real substance or reason beyond shock factor. It felt contrived.

Nate and James were best friends since college. James has always had a thing for Nate but he thinks Nate is straight. A drunken kiss reminds Nate of some feelings he once had for James he’s repressed. When he admits how he feels to James, James panics and tells Nate he has no interest in a relationship with Nate because he’s afraid. Even though he does. Nate is a cop and he runs off into the night and does something careless that ends up with him leaving town for four months. James writes him every day to let Nate know he made a mistake and he does have feelings for Nate.

I generally love a friends to lover and/or a gay for you story. The romance in this story was just too filled with angst and not really sexy or engaging. It probably didn’t help that I didn’t care for James. He’s slept with half the guys he comes in contact with. He’s selfish and does some really stupid things in this book. It’s hard to like a couple when one half of it irritates the hell out of you. Nate wasn’t so bad. I thought his struggle was at least understandable. He was pretty reckless at times. Both characters seemed portrayed as likable and capable but on the flip side a total mess. I didn’t really ever get a good feel for them.

I don’t like that I didn’t really like any part of this book. The beginning was okay until the big lie that leads to the spiral into DRAMA land. I have enjoyed books by this author. This one was a miss for me however.