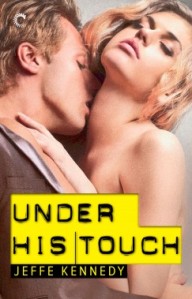 Blurb:  Amber Dolors knows better than to get involved with her boss. Devastatingly handsome in his sharp suits and sexy beyond belief, he possesses an air of command that fuels her darkest fantasies. But she’s worked too hard to get this job, and keeping it will lead to a brilliant future. She won’t cross that line—even if his way of giving orders and demanding her best performance gives her delicious warm shivers.

Alexander Knight prides himself on his integrity and self-discipline. After all, he hasn’t risen to the position he enjoys by indulging his whims over ambition. He also isn’t blind. He’s certainly noticed his sharp, young assistant is hot as hell. His self-imposed sexual hermitage doesn’t stop him from watching her. And endlessly fantasizing.

The day Alec’s cool reserve cracks and Amber catches a glimpse of something simmering beneath his apparent indifference is the day everything between them changes. Alec gives her what she’s been looking for sexually—as masterful in the bedroom as he is in the boardroom. He finds himself in the grip of an affair that tests even his boundaries, while Amber’s new role as willing student pushes them both past any consideration other than mutual longing.

Review: Amber is young and smart. She’s going places with her job and her life. But she’s really really interested in her boss. And she knows it’s wrong and that it could potentially jeopardize her position, but if he would only give her a hint…

Alec isn’t sure what to do. He’s incredibly interested in his assistant at work, but it would completely damage both of their careers if he asked her out. If he even acted interested. And trying to get her transferred so he could ask her out would make it seem like he didn’t like her or he wasn’t satisfied with her work–both nonnegotiable. What can he do except suffer in silence with a stiff, British upper lip?

Well, apparently he can let her fondle his erection! This book veered from can we? to what can’t we do!, with nice exposition in between. The older Alec came with his own baggage from a former marriage and D/s relationship with his ex-wife; and Amber is very new to the scene yet very interested in trying out all the things that she is pretty sure she would like. But she’s got a few totes of her own to unpack–old boyfriends who thought she was a freak because she wanted to be spanked and worse. So it’s two steps forward and three steps back, but what delicious steps they are.

With Alec, Amber finds herself exploring new parts of herself sexually and testing boundaries never crossed before. She’s also finding new challenges at work as well, and finding out that sometimes the boardroom isn’t much different from the playground. People don’t like to share, and when they find out you’ve got a special toy, they want to take it for themselves. Plus, they want to get you in trouble.

Alec also finds himself at the end of his boundaries…literally. Guided by her new-found intimate knowledge of him, Amber sets up a scene guaranteed to push all his buttons. Hesitating, not sure if he can follow through, Alec surprises and delights them both when he finally opens up and moves into the real expression of his sexuality and shows Amber that he truly feels open with her and trusts her explicitly with himself–inside and out.

I really appreciated the fact that Amber was intelligent and good at her job. There was real concern on all parts  that her career not be jeopardized because of her social choices to see Alec, and that she not be punished because of a relationship that might be outside of the norm. Her career was given full weight in this scenario–comparatively as much as Alec’s senior one, and that was insightful and well-done. Just because she was female, she wasn’t relegated to a more subservient role like secretary or administrative assistant that she could or would be willing to toss in order to stay in the relationship. Alec actually made concessions, large ones, in order to make sure that Amber’s position and job reputation remained intact throughout the book and that was admirable–of his character and the author.

The author mixes subtle game play with real human emotions to build a realistic, heartfelt romance into a kinky sexual backdrop that never crosses the line into discomfort and gives justice to the two people involved. Maybe a little unrealistic? Perhaps. But what is a romance sometimes but a little impossible, a tab bit improbable. I give it 4 stars and hope they enjoy themselves forever!