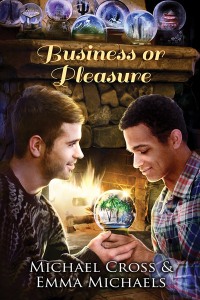 Blurb: When American Ian lands a secretarial job in the United Kingdom, he thinks he’s set for life. Admittedly, he’s still a bachelor living in a small apartment and working for a complete jackass, but other than that, his life is everything he ever hoped for in an enticing city full of beautiful people. When Alistair Security is robbed during the Christmas Fundraiser, the last thing Ian expects is to end up locked in with his boss, Alex Alistair, and to realize he might have mistaken his resentment for something else. The two men find common ground throughout the night, but when morning comes and the news hits the headlines, their connection will be tested. Ian might find himself at the start of a hot office romance—or he’ll spend the holidays browsing the classifieds.

A story from the Dreamspinner Press 2014 Advent Calendar package “Celebrate!”.

Review: Ian has been working for Alex Alistair at Alistair Security Incorporated for three years. It has been a challenge right from the get go. His boss is what most people would call a “nightmare” to work for, but Ian enjoys his work and his boss. Though he could do without always seeing his boss have so many affairs with woman that are not his fiancé. On the night of the Christmas Eve party at work, Ian feels like something is about to go down but he just can’t put his finger on it. When his boss acts like a jerk towards him, he leaves the party to head up to the office to do some work, only to have Alex follow him to apologize. Then the lights go out, the doors are locked from the outside, and Ian realizes that whatever was bothering him is happening, and it’s happening now. Now, he’s stuck with his boss and no way to reach anyone. They decide if they can just make it to the roof, one of them can use their cell phones and call for help.

I liked the story. It was good. Fast paced and the dialogue between Alex and Ian was really funny. I just can’t get my brain to except that a man who has been cheating on his fiancé with EVERY WOMAN he can get his hands on, for the last three years, is gay. Yeah, the guy was obviously in the closet but the way he was portrayed was really sleazy. The ending wrapped up really fast and gives the reader a solid HFN.