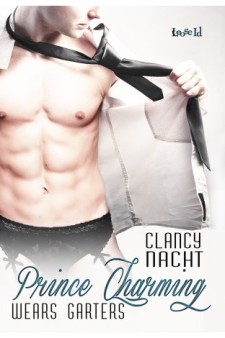 Blurb: Sara feels like her life is on track. She has the career of her dreams as a senior art director at one of the hot ad agencies in town. Her only real annoyance is the womanizing account executive in the office next door, Chuck.

When Chuck lands a new account, he sets his sights on Sara to work with him, but she gets the feeling he’s looking for more. Working late one night she discovers Chuck’s secret.

As a career-oriented woman, she’s not sure if she’s ready to balance her steamy encounters with work life, and she’s positive that trying to date Chuck would be a disaster. Yet, each time they get together she can’t help but speculate on what Prince Charming’s wearing under his well-tailored trousers.

Review: Sarah is on the fast track at the advertising agency where she’s a senior art director. She’s got a great team working with her; and with her best friend Dane doing her production work, she’s shooting for the stars. It’s only in the romantic relationship department that Sarah is sitting on the sidelines. After a previous, disastrous relationship burned her on men and lost her a prestigious position at another top firm, Sarah has made it clear to one and all that while she might not mind a good time, a long-term relationship is out of the picture. That little house with the white picket fence + husband + 2.5 kids + dog is not for this girl. Career comes first.

Office next-door neighbor Chuck, however, seems content lavishing his time and attention on his two loves – sales and the ladies — in multiple. More than once the office staff has been regaled with the sordid details of his latest affair directly from the scorned lady’s mouth; women who show up there determined to embarrass Chuck since they can’t manage to keep him. It’s given him quite the hound-dog reputation around the water cooler; and this, for already burned once Sarah, makes her twice shy of Chuck.

Chuck is sales; Sarah is design. Chuck is supposed to shmooze the clients and then Sarah takes over. But Chuck likes to help. And sometimes his ideas stink. After a little dustup over the latest pitch idea from Chuck directly to Sarah’s design team, suddenly she’s having to work with him on a special project for a client. And she’s finding herself unwittingly attracted to this testosterone-filled menace, this office Lothario. And suddenly Dane, the best friend she can usually count on to mock Chuck, is suggesting that she… notice him? In a sexual way? What?

After finding a garter in Chuck’s office late one night, Sarah confronts him, sure she’s caught him having what she suspects is one of his continual illicit sexual affairs at the office. His gratitude at her agreement to remain silent coupled with his strange behavior the next day make her wonder if there was some sort of miscommunication. With Dane’s help, she begins to notice a few things and realizes that they all may have been *mislead* about Chuck and what he’s actually been doing in his office ‘after hours.’

And Sarah finds that she may have been *mislead* about her interest in having a long-term romantic relationship after all.

This was a charming, well-written story with a little kink thrown in about a couple who are both damaged from previous relationships. I was surprised to learn what I did about Chuck – he didn’t act that angsty – so it was a nice change to have him not go all angry alpha. He was actually kind of a sweetheart. And I really felt for Sarah – she got the raw end of the deal. But the author dealt with her issues honestly, and without a lot of angst and too-stupid-to-live moments.

I really enjoyed this book. It was lighthearted while containing kink, some pretty nasty business shenanigans, and two characters that could have played a lot more damaged than they did – I really appreciated how it was carried off. That’s a hard line to stay on, and Clancy Nacht did it, and I salute her! Thanks for an enjoyable read, and I look forward to more of your books.