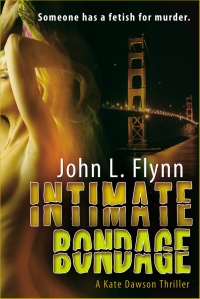 Blurb:   Someone has a fetish for murder.
Detective Kate Dawson is willing to go undercover to catch a serial killer.
But this time, undercover may be exactly what the killer wants.
A rich, politically connected CEO dies in his private dungeon on a foggy San Fran night-beaten and castrated by a mysterious sex worker he hired. Detective Kate Dawson and her partner are assigned the case. Their only lead is a provocative email from “Crystal Rose” and an IP address at the University of San Francisco.
Before long, Kate’s on the trail of a serial killer who uses the seedy underworld of porn shops, Internet sex sites, and S&M clubs to target victims. She knows the only way to catch the killer is to become part of that world.

Review: I enjoyed the beautiful descriptions of San Francisco and the history of some of the buildings and landmarks described in this book. I felt that I was on a tour of the city with a knowledgable guide, a guide who knows every nook and cranny of the city and the histories of every prominent person who was ever associated with those famous buildings. I learned about the works of Dashiell Hammett and his most famous book, The Maltese Falcon, and the movie of that book, starring Humphrey Bogart. What I didn’t learn nearly enough about was Kate Dawson.

I wanted to read this book because Kate Dawson sounded like a fascinating character; a full, complete and sympathetic modern woman. Her backstory is tragic. Her daughter was murdered several years prior to this story by her ex-husband, an event that I felt should have been explored and explained in more depth, but there was little said about it except vague references to her meltdown following the event. I never felt the depth of emotional pain she must have experienced. What I saw, instead, was a woman who owned an expensive BMW that she can’t afford (it’s in the financial company’s impound yard more than it’s in her possession), wears Versace, lives in a fairly high-end neighborhood and has thrift store furniture. I never felt that there was any motive for her odd, and in my opinion, irresponsible, behavior.

I thought the most interesting character in the book was Kate’s partner, Frank Miller. Frank, a 62 year old black man who had been on the SFPD for 40 years, had several lengthy dialogues about the difficulties and discrimination against black officers in the department and the city. While they were interesting and disturbing, they had no real purpose in progressing the story aside from making it clear that police and city politics were inherently unfair and prejudicial. The strangest character in this story is Lenny, Kate’s stalker and neighbor. Maybe he was intended as comedic relief. He has a lot of page time that I felt could have been used to explain Kate’s obsession with expensive things she can’t afford.

The final scenes of this book should have been emotionally draining. They weren’t. The ending was predictable. The perpetrator of these really awful crimes was evident from fairly early in the story.

There are some beautifully written passages in this book showcasing the talent of what is, undoubtably, a talented writer. But my lack of an emotional connection to the main character, Kate, along with a convoluted plot and no clear motivation from any of the characters just left me feeling kind of flat. Hopefully the next reader will feel differently. I don’t think I will be following any more adventures featuring Kate Dawson.