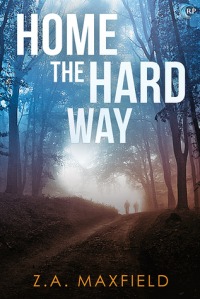 Blurb:  Dare Buckley has come home—or at least, he’s come back to Palladian, the small town he left as a teenager. After a major lapse in judgment forced him to resign from the Seattle PD, Palladian is the only place that’ll hire him. There’s one benefit to hitting rock bottom, though: the chance to investigate the mystery of his father’s suicide.

Dare also gets to reacquaint himself with Finn Fowler, whose childhood hero worship ended in uncomfortable silence when Dare moved away. But Finn isn’t the same little kid Dare once protected. He’s grown into an attractive, enigmatic stranger who neither wants nor needs what Dare has to offer.

In fact, Dare soon realizes that Finn’s keeping secrets—his own and the town’s. And he doesn’t seem to care that Dare needs answers. The atmosphere in Palladian, like its namesake river, appears placid, but dark currents churn underneath. When danger closes in, Dare must pit his ingenuity against his heart, and find his way home the hard way.

Review: Dare Buckley has moved back to Palladian. It’s not a triumphal return. As a Seattle police detective he made a disastrous alcohol based sexual decision with someone who turned out to be the criminal they were looking for. Dare is very lucky to have gotten any job anywhere. Dare’s old best friend, Finn Fowler, still lives in Palladian. Best friend isn’t really the right descriptor for Finn. Finn was much younger, from a very troubled home, and was the frequent victim of bullying. Dare was his protector. Dare wants to rekindle his friendship with Finn, but Finn rapidly realizes Dare wants someone to gaze upon him with wonder. He doesn’t want a friend as much as he wants adoration. Dare doesn’t realize how much he needs to have someone look upon him in wonder. Dare also doesn’t realize how much he doesn’t know Finn. At all. While looking into the things that happened in the town while he was gone, Dare finds information about the horrendous bullying and beating Finn experienced during high school. What Dare didn’t expect to find was a relationship of a sexual nature between Finn and the man Dare considers to be Finn’s biggest bully, Bill Fraser. Dare also didn’t expect to feel jealousy. Dare doesn’t only think Finn is and should be his, he may want to be on his knees before Finn. Or he may be disgusted. Dare can’t really tell.

Finn can see that Dare is a disaster. He drinks too much and becomes sexually forward while drunk. Finn doesn’t want a boyfriend and doesn’t need a protector. Finn really, really doesn’t need a protector. Dare can’t begin to imagine how much Finn knows or can take care of himself. Dare also has to reconcile everything he knew about Finn with everything he’s learning and the fact several unsolved crimes seem to be swirling around Finn. Again, Dare finds himself getting drunk and having sexual relations with a potential suspect. What Dare didn’t expect was a D/s experience that would leave him feeling that Finn was looking at him like he was the most amazing thing in the world. It was exactly what he wanted and completely terrifying. Dare does his best to back away from Finn but finds he can’t. He doesn’t want to be away from Finn. He wants Finn for more than Finn wants to be had. As scared as Dare is of the ramifications of a D/s relationship, Finn is scared of any relationship. Finn also has the answers to the biggest question Dare has. Unfortunately for Finn, the dead bodies are piling up and a whole lot of questions need to be answered.

Dare learns the hard way that you can’t go home again. Home isn’t a magical place that stays the same while you go out and test the rest of the world even if the bakery décor stays exactly the same. Dare had a lot of problems that came back home with him. Most importantly, his blooming alcoholism. Pretty much all of Dare’s mistakes are made while drunk. However, Dare’s biggest personal leap is also made while drunk. He never would have submitted to Finn the first time while sober. He never would have realized how much he needs someone else to be in control had he not been drunk. I was left with a lot of mixed feelings about Dare’s drinking. In some ways that aspect of the book felt unfinished to me. Dare was a drunk and kept on drinking despite multiple professional reprimands and friendly comments from co-workers and townspeople. Dare still had a tough row to hoe in terms of managing his alcoholism and it wasn’t mentioned again after the climax of the story. It’s left up to me to decide if he was going to attend meetings or was cured by having a boyfriend.

Finn is the pivotal character in the mystery of this book. Some of it was a mystery to him, as well. I will say the mystery was very mysterious. I had no clue. More than once I had myself convinced it was a character only to be wrong. The real answers were tragic and wrapped up in a mantle of guilt and greed. Some of the characters got what they deserved. Mostly, Finn and Dare were left to mop up the mess created by a bunch of drunk buddies and Finn’s slightly crazy, free-spirited mother. Unknowingly, both men are on a path to repeating their parents’ mistakes until they rescue each other.

2 thoughts on “Home The Hard Way”