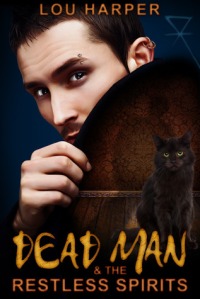 Blurb:  Dying sucks hairy monkey balls, even when you’re not the stiff.

Denton Mills has a secret: he can see dead people. Or rather, how they died. It’s quite a drag in a city like Chicago, teeming with the echoes of the no-longer living. Rather than whine about it, Denton has learned to live with his troublesome talent. His adaptability comes in handy when he meets his enigmatic new neighbor.

Bran Maurell catches Denton’s eye right away, but unfortunately Mr. Tall, Dark, and Mysterious is as standoffish as he is alluring. However, after an unexpected introduction from Bran’s cat brings the two men together, Denton discovers they have a mutual interest in the spirit world. Herbalist by day, Bran moonlights as a witch, performing house cleansings for a fee.

From Bran, Denton learns that his knack for interacting with the dead qualifies him as a necromancer. It makes good business sense for them to team up and rid Chicago of its pesky spirits one grateful client at a time. Amongst ghostly adventures the attraction between the men is impossible to ignore. They seem like perfect partners—unless Bran’s not-so-little secret comes between them. 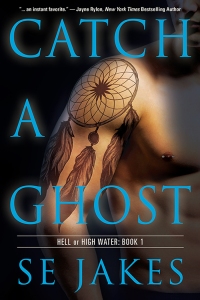 Blurb: Everyone knows that Prophet—former Navy SEAL, former CIA spook, full-time pain in the ass—works alone. But his boss at Extreme Escapes, Ltd. has just assigned Proph a new partner and a case haunted by ghosts from Proph’s past. Suddenly, he has to confront both head-on.

Tom Boudreaux—failed FBI agent, failed sheriff, full-time believer in bad luck—is wondering why the head of a private contracting firm has hunted him down to offer him a job. Still, he’s determined to succeed this time, despite being partnered with Prophet, EE’s most successful, lethal, and annoying operative, on a case that resurrects his own painful past.

Together, Prophet and Tom must find a way to take down killers in the dangerous world of underground cage matches while fighting their own dangerous attraction. When they find themselves caught in the crossfire, these two loners must trust each other and work together to escape their ghosts . . . or pay the price.

END_OF_DOCUMENT_TOKEN_TO_BE_REPLACED 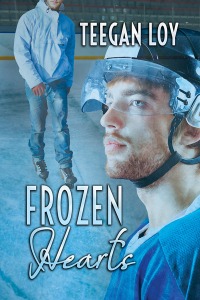 Blurb: The best college hockey player in the country is hanging up his skates because he’s tired of living a lie. Five years ago, Erik Fox’s father found out about his indiscretions and forced him to change schools in the middle of the night. Erik had a boyfriend, and hockey players do not date boys.

With his college career over, Erik is determined to get his life on the right track, and that means making peace with the boy he left behind and living according to his own desires. But to do it, he must resist pressure from his father and everyone who wants to define him as nothing but a hockey player.

END_OF_DOCUMENT_TOKEN_TO_BE_REPLACED 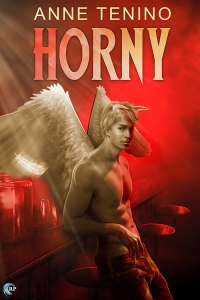 Blurb:  Ryan Caulfield is a devout avoider of risk, so it comes as a surprise when he agrees to help a group of supernatural law enforcers catch Zeus (the god voted Least Likely to Keep It in His Pants). But how could he say no? He’s nothing if not law-abiding, even if it’s a legal code from another plane of existence. Besides, it all seems harmless enough . . . at least until the half-naked and all-hot immortal with wings and horns shows up.

In his century as an investigator for the Olympic pantheon, Leander of the eroté has solved a lot of cases and slept with a lot of humans. But on this investigation, it looks like he won’t be doing either. His assigned task is bogus, and the most alluring mortal he’s ever met is determined to avoid hooking up.

But the pull Leander feels toward Ryan the bartender won’t let him turn his attention away for long. Soon, he finds himself interested in much more than his usual dalliances with mortals. Now if only he can convince Ryan he’s worth the risk.

END_OF_DOCUMENT_TOKEN_TO_BE_REPLACED 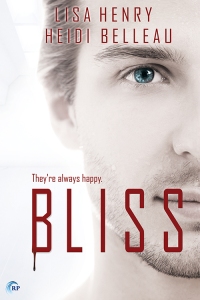 Rory James has worked hard all his life to become a citizen of the idyllic city-state of Beulah. Like every other kid born in the neighboring country of Tophet, he’s heard the stories: No crime or pollution. A house and food for everyone. It’s perfect, and Rory is finally getting a piece of it.

So is Tate Patterson. He’s from Tophet, too, but he’s not a legal immigrant; he snuck in as a thief. A city without crime seems like an easy score, until he crashes into Rory during a getaway and is arrested for assaulting a citizen. Instead of jail, Tate is enrolled in Beulah’s Rehabilitation through Restitution program. By living with and serving his victim for seven years, Tate will learn the human face of his crimes.

If it seems too good to be true, that’s because it is. Tate is fitted with a behavior-modifying chip that leaves him unable to disobey orders—any orders, no matter how dehumanizing. Worse, the chip prevents him from telling Rory, the one man in all of Beulah who might care about him, the truth: in a country without prisons, Tate is locked inside his own mind.

END_OF_DOCUMENT_TOKEN_TO_BE_REPLACED 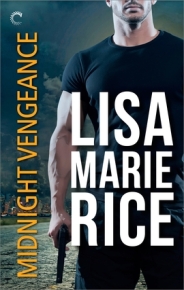 Blurb: Morton “Jacko” Jackman isn’t afraid of anything. He’s a former Navy SEAL sniper, and he’s been in more firefights than most people have had hot meals. Lauren Dare scares the crap out of him.

Gorgeous, talented and refined, she’s the type of woman who could never be interested in a roughneck like him. So he’s loved her fiercely in secret, taken her art classes, and kept a watchful but comfortable distance. Until now.

Lauren had finally found a home in Portland, far from her real identity, far from the memories of her mother’s death, and outside the reaches of the drugged-out psycho who’s already tried to kill her twice. One tiny misstep—a single photograph—has shattered it all. She has no choice but to run again, but this time she’ll give herself a proper farewell: one night with Jacko.

Their highly charged emotional encounter changes everything. In Jacko’s arms there cannot be fear, there can only be pleasure. Anyone wishing her harm will have to pass through him, and Jacko is a hard man to kill. END_OF_DOCUMENT_TOKEN_TO_BE_REPLACED

Blurb: Noah thinks he’s nothing special. Average height, a bit on the skinny side, and cute but rather geeky, he’s relentlessly ordinary. He certainly doesn’t expect to be noticed by Sol, the gorgeous dark-haired stranger Noah sees on his commute home most days. But when Noah’s friend, Dom, persuades Noah to take a huge risk in a bid to get Sol’s attention, things turn out better than Noah dared to hope. Noah and Sol start dating, and much to Noah’s surprise, his feelings seem to be reciprocated.

But Noah’s insecurities make him doubt Sol. He doesn’t believe he’s interesting enough or sexy enough to hold Sol’s attention, and as Sol tries to get closer, Noah’s instinct is to pull away to protect himself. If their relationship is going to survive, Sol needs to convince Noah that he sees Noah very differently than Noah sees himself. Because to Sol, Noah is something very special indeed.

END_OF_DOCUMENT_TOKEN_TO_BE_REPLACED 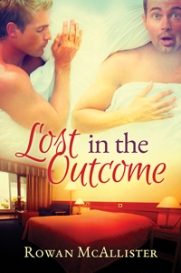 Blurb:  When Nathan Seward wakes up in a cheap hotel with a stranger, unable to remember the night before, unscrupulous plots and clandestine schemes are the furthest thing from his mind. True, he’s in Houston to bid on his biggest contract yet, one that will put his software development company on the map, but he’s the underdog at the table, not one of the big players. Unfortunately someone out there sees him as a threat and isn’t above drugging and blackmailing him to put him out of the running. Luckily for Nathan, the man in bed next to him couldn’t be further removed from the corporate world.

Tim Conrad is scraping the bottom of the barrel. He left college during his freshman year to take care of his dying mother, and life and lack of money prevented him going back. Now twenty-seven, his dreams are long buried, and he’s scraping by with dead-end jobs and couch surfing because he can’t afford a place of his own.

As Nathan tries to run damage control and figure out what the hell happened to him, he and Tim discover a connection neither was looking for, as well as dreams they’ve both forgotten.
END_OF_DOCUMENT_TOKEN_TO_BE_REPLACED 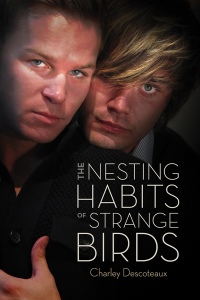 Blurb:  All he ever wanted was to be a normal guy….

Phil Brask spends his days in the basement of his mentor’s Victorian home, converting legal documents into electronic format. When the pipe feeding the water heater bursts, Lee Redding arrives in the plumber’s truck and draws Phil away from the narrow focus of his computer and camera lens. Lee gives Phil hope for a life beyond the walls he’s constructed using the nesting habits of migratory birds and dense legal files, a guided tour through a world filled with romance and music…maybe even family. But there’s a reason Phil retreated behind those walls, why he panics at a simple touch.

Lee has a good life—working with his uncle and on his mother’s farm, playing bass in a horrible metal band, and hooking up when he pleases—but he’s always suspected something was missing. When he meets the hot photographer with the icy-blue eyes, he knows exactly what that something is. Phil isn’t like other guys, but neither is Lee beneath his carefree exterior. Maybe Lee’s the perfect guy to show Phil that everything doesn’t have to be done the hard way and “home” isn’t a four-letter word. END_OF_DOCUMENT_TOKEN_TO_BE_REPLACED 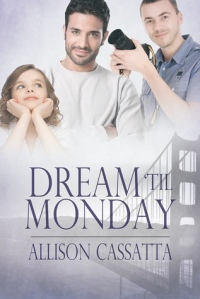 Film director Miles Eisenberg isn’t a man who wants to commit. He has a daughter who means the world to him at home, and he worries over how his decisions might affect her. He comes up with a million good reasons not to give Sawyer a second look, but sometimes the heart is determined to love, and the brain can’t convince it otherwise. His affair with Sawyer becomes a whirlwind romance worthy of the silver screen, but life doesn’t always imitate art, and imperfect heroes don’t always get their happy endings.